We are living the stress test. In this crisis it is the responsibility of risk managers to avoid compounding the medical and economic crises with a financial one. For commercial real estate lenders this means understanding the potential impact on borrowers and getting ahead of the game to restructure their loans and avoid the costs and dislocations of bankruptcy. That restructuring needs to be economically sensible, robust to the range of different possible outcomes, and transparent so that investors do not need to have unfounded fears of financial difficulties.

The financial industry has been increasingly guided by financial risk models. However, normal credit models have been broken by the COVID-19 crisis because there is no historical default data for such an event. Now banks are turning to scenario analysis. That too has limitations, because it only tests a handful of possibilities. In this note we are looking at what can be learned from cashflow simulation. For those unfamiliar with scenario analysis and simulation, Appendix 1 gives a brief introduction.

The note is organized in four sections:

Of the restructuring alternatives tested, an 18-month interest roll-up and a sweep were effective in reducing the loss.

Qualitative Discussion of the Impacts on Commercial Real Estate

In the next few months there will be historic levels of unemployment, economic disruption and government interventions. These will play out unevenly across geographies and sectors.

Looking at the short term there will be lease defaults by 'non-essential' retail businesses and many office-based businesses. It will be nearly impossible to re-lease any vacant retail space during the crisis so we are seeing landlords forgive rents to avoid creating vacancies. Smaller office-based businesses will avoid renewing leases because they realize they can use working-from-home to reduce their rental requirements. Large office re-lettings will freeze due to the impossibility of physically moving, so renewals will be higher and new lettings close to zero. As supply chains shorten and become less lean, the need for last-mile logistics and warehouses increase, but long-distance international logistics will weaken. Hotels, leisure, and public transport will have virtually no revenue other than government support.

In the medium term there is the weakening of demand for physical retail, reduced numbers of people commuting to offices, fewer business travelers using hotels, and increased demand for on-line delivery.

The Specific Drivers of Cashflows

These qualitative considerations can be operationalized into specific cashflow impacts through the following factors:

Individual properties will have other significant effects but this gives a broad view of the major impacts across the portfolio. As the crisis unfolds other factors may come to the fore such as increasing inflation and interest rates. For now, let's just deal with these initial factors.

To show the effect of these factors on a typical deal we set the following stress relative to pre-crisis expectations (these are average effects over each year starting from Q2 2020):

Effect of the Crisis on a Typical Deal

To illustrate the likely impact on an individual deal, we took a typical simple retail property with eight primary tenants, supporting a 15-year mortgage with 25 year amortization. The financials in the basecase are illustrated below (note the drop in DSCR in 2031 is due to the expiration of the anchor tenant, but that event was not considered a significant problem given the expected healthy LTV by that point). 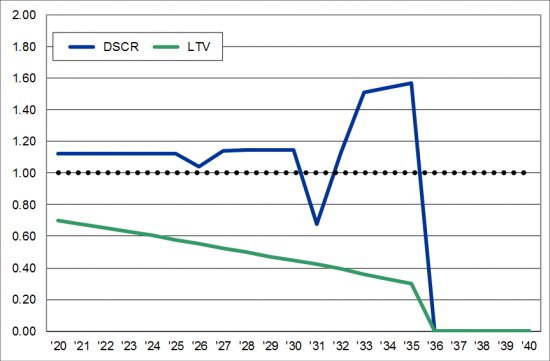 The risk in pre-crisis conditions is illustrated below. The graph on the left is the probability of a default on the loan, and on the right is the expected loss (both peak in early years when LTV is tight, and the probability of default also peaks at refinancing for scenarios where there is poor income, but LTV is sufficiently healthy to avoid foreclosure and loss). 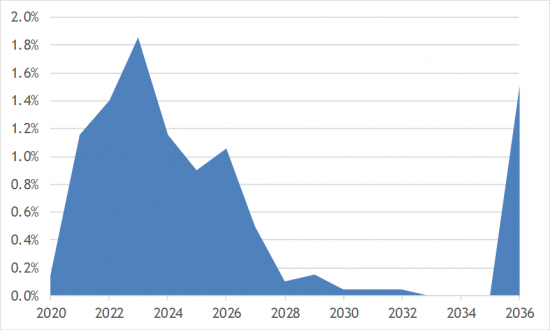 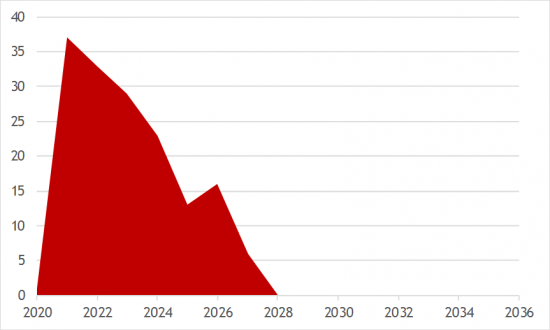 The risk factors for the scenario were 'turned-on' sequentially to show the relative effects. The table below gives the cumulative probability of default and NPV of loss as each risk is added (NPV of Loss is as a percentage of initial balance).

Default Rate and Loss Depending on Stress Factors Considered


In the table there is a step in the default rate when the fall in capital values is considered because the combination of poor DSCR and poor LTV to trigger a default under normal rules. There is also a large step in the NPV of loss when the increased default rate on leases is considered because units with expected stable income become vacant and initially unlettable.

The graphs below show how the probability of default and losses shift to the early years (although foreclosures for uncured properties happen in later years, they are tagged to the first default). Notice that the scale of defaults and losses is an order of magnitude greater than the pre-crisis case.

Probability of Default Profile in Crisis 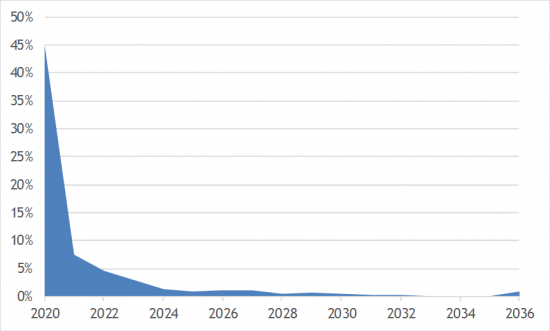 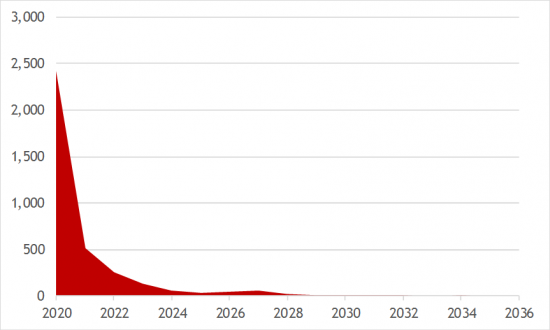 The Effectiveness of Restructuring

In addition to the existing mortgage, four alternative structures were considered:

Other potential structures would be a combination of the above with tailored amortization, a sinking fund, reserve account, covenants, or a switch to a floating rate loan with lower near-term payments. The effect of each structure is shown in the table below.

Reduction of Default and Loss after Re-structuring the Loan


Looking at the PD, interest roll-up makes a large difference, but roll-up of both principal and interest allows initial excess income to escape and builds-up higher debt and problems for the later years. The sweeps defaults happen at refinancing. Looking at the NPV of loss, adding the sweep to the P&I payments has some effect, but the sweep on its own is clearly the most effective in avoiding the transaction costs of foreclosure. A sweep of 80% seems to be sufficient to avoid contractual defaults in times when cashflows are tight, but still pays off sufficient of the loan to avoid refinancing defaults in most scenarios. 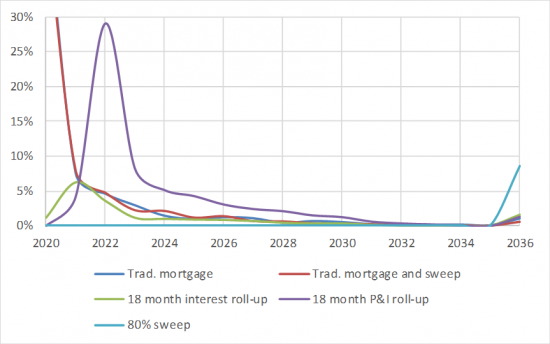 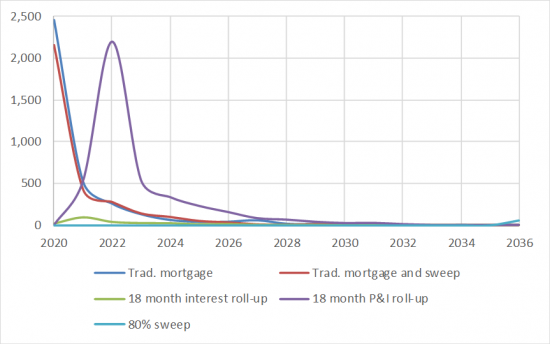 The COVID-19 crisis is brutally hard on all sectors including commercial real estate, but moderate short-term forbearance and restructuring looks to be the most effective way available to preserve financial value and stability.

The standard approach for testing previously-unseen events is scenario analysis. With scenario analysis you can test different assumptions and possibilities to show the consequences. However, that approach of testing individual scenarios makes it difficult to cover all possible outcomes, especially for discrete events such as lease-defaults.

As an alternative, Monte-Carlo cashflow simulation tests thousands of scenarios to produce risk statistics such as the probability of default (PD), loss given default (LGD) and current expected credit losses (CECL). Simulation captures the real-world interlinkages between tenant events, market conditions, property events and loan requirements. At the highest level, we can link simulation models to the results from epidemiological models to give waves of lock-downs as covid-19 is repeatedly contained and released with each lockdown disrupting the income from leases in different ways: clothing vs. pharmacy.

This is done for CRE lending in the cashflow engine of Risk Integrated's Specialized Finance System to estimate future cashflows, returns, defaults and recoveries. The cashflow simulation method allows new mechanisms to be built naturally into the model. We can even put in mechanisms to link future government intervention dependent on conditions, for example 'if unemployment is greater than 20%, (or rents fall by more than 50%) government will inject funds to pay leases directly'. This then also becomes a tool for making policy decisions to see the consequences on the market. Notice that this modelling approach directly takes the real-world legal structures, linkages and business conditions and formalizes them into natural statements that then influence future cashflows.

More information about cashflow simulation for commercial real estate can be found on the Publications page of Risk Integrated's website.

Risk Integrated delivers sophisticated risk and profitability measurement systems for commercial real estate finance. Founded in 2001, Risk Integrated delivers enterprise software-as-a-service to global banks and asset managers for regulatory compliance and business optimization. The underlying financial models use computationally intensive approaches such as Monte Carlo cash flow simulation, harnessing the power of parallel computation and Cloud-computing. Key features of the systems are the abilities to handle users, data-integration, and massive amounts of data on a technology platform that is resilient, secure and scalable. Risk Integrated is now applying these capabilities and coupling the financial models with machine learning and artificial intelligence.